The display effect of the citation needed template in English Wikipedia

"[Citation needed]" is a tag added by Wikipedia editors to unsourced statements in articles requesting citations to be added. The phrase is reflective of the policies of verifiability and no original research in Wikipedia and has become a general Internet meme. On the English Wikipedia, the display effect looks like this: [citation needed]

By Wikipedia policy, editors should add citations for content, to ensure accuracy and neutrality, and to avoid original research.[1] In June 2005, Chris Sherlock, a Wikipedia editor with the username Ta bu shi da yu, created the "citation needed" template, to be added to statements without a citation that needed verification.[2][self-published source?] 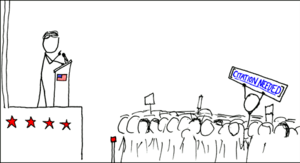 An xkcd comic featuring a protester with a "[citation needed]" placard

In 2008, Matt Mechtley created stickers with "[citation needed]", encouraging people to stick them on advertisements.[3] 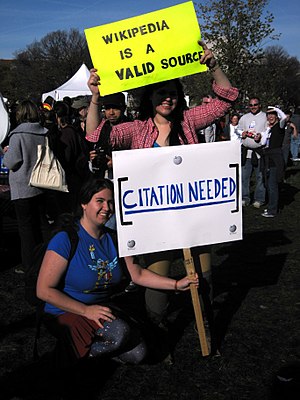 "Protesters" at the Rally to Restore Sanity and/or Fear, 2010

In 2010, American television hosts Jon Stewart and Stephen Colbert led the Rally to Restore Sanity and/or Fear at the National Mall in Washington, D.C. Some participants held placards with "[citation needed]".[4]

“Citation Needed” is the title of a weekly comedy podcast hosted by the hosts of skeptical podcasts “The Scathing Atheist” and “Cognitive Dissonance” wherein they “Read a single article from Wikipedia and pretend [they] are experts” [5] . Topics are often suggested by regular paid listeners and run the gamut from Centralia, Pennsylvania to The Mandela Effect.