Deletionism and inclusionism in Wikipedia

Statistics about the number of deletions per day (2007).

Deletionism and inclusionism are opposing philosophies that largely developed within the community of editors of the online encyclopedia Wikipedia. The terms reflect differing opinions on the appropriate scope of the encyclopedia and corresponding tendencies either to delete or to include a given encyclopedia article.[1]

"Deletionists" are proponents of selective coverage and removal of articles seen as poorly defended. Deletionist viewpoints are commonly motivated by a desire that Wikipedia be focused on and cover significant topics – along with the desire to place a firm cap upon proliferation of promotional use (seen as abuse of the website), trivia, and articles which are, in their opinion, of no general interest, lack suitable source material for high-quality coverage, or are too short or otherwise unacceptably poor in quality.[2][3][4]

"Inclusionists" are proponents of broad retention, including retention of "harmless" articles and articles otherwise deemed substandard to allow for future improvement. Inclusionist viewpoints are commonly motivated by a desire to keep Wikipedia broad in coverage with a much lower entry barrier for topics covered – along with the belief that it is impossible to tell what knowledge might be "useful" or productive, that content often starts poor and is improved if time is allowed, that there is effectively no incremental cost of coverage, that arbitrary lines in the sand are unhelpful and may prove divisive, and that goodwill requires avoiding arbitrary deletion of others' work. Some extend this to include allowing a wider range of sources such as notable blogs and other websites.[3][5]

To the extent that an official stance existed as of 2010, it was that "There is no practical limit to the number of topics it can cover" but "there is an important distinction between what can be done, and what should be done",[6] the latter being the subject of the policy "What Wikipedia is not".[6] The policy concludes "Consequently, this policy is not a free pass for inclusion".[6]

Because of concerns about vandalism and appropriateness of content, most wikis require policies regarding inclusion.[7] Wikipedia has developed spaces for policy and conflict resolution regarding the disputes for individual articles.[8] These debates, which can be initiated by anyone,[9][10] take place on an "Articles for deletion" page[11] (often referred to by editors as AfD). Much discussion concerns not only the content of each article in question, but also "differing perspectives on how to edit an ideal encyclopedia."[12]

A 2006 estimate was that pages about Wikipedia governance and policy entries were one of the fastest-growing areas of Wikipedia and contained about one quarter of its content.[16]

Inclusionists may argue that the interest of a few is a sufficient condition for the existence of an article, since such articles are harmless and there is no restriction on space in Wikipedia.[3][5] Favoring the idiosyncratic and subjective,[12] an inclusionist slogan is "Wikipedia is not paper."[9][16]

On the other hand, deletionists favor objectivity and conformity,[12] holding that "Wikipedia is not Google,"[2] a "junkyard,"[9] or "a dumping ground for facts."[18] They argue that the interest of enough people is a necessary condition for article quality,[14] and articles about trivial subjects damage the credibility and future success of Wikipedia.[16] They advocate the establishment and enforcement of specific standards and policies[2] as a form of jurisprudence.[17]

According to veteran contributor Geoff Burling, newer members are less likely to have helped delete articles that should have been kept in hindsight, and therefore have learned less about exercising caution in the deletion process.[18] Journalism professor K.G. Schneider has identified the mentality of deletionism as having manifested once the emphasis of the encyclopedia shifted from quantity to quality.[19] 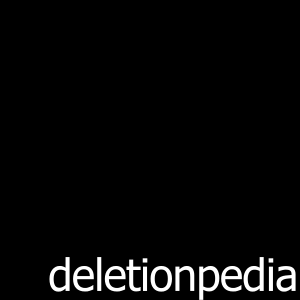 A "Wikimorgue", in which all deleted articles and their edit histories would be retained, has been suggested as a means to provide greater transparency in the deletion process.[10][19]

In an effort to promote a middle ground between the two philosophies, the "Association of Mergist Wikipedians" was created in November 2004,[20] emphasizing the possibility of merging articles together as an alternative to both outright deletion of content and the retention of separate articles for less important subjects. A merge from one article to another is executed by moving the relevant content from the former to the latter, and redirecting the former to the latter.[17]

Documentarian Jason Scott has noted the large amount of wasted effort that goes into deletion debates.[21] Deletion debates may contribute to community disintegration,[3] restriction of information,[14] or a decrease in the rate of article creation that suggests a decrease in passion and motivation amongst editors.[22] Being explicitly called an inclusionist or deletionist can sidetrack the issue from the actual debate.[20] Nevertheless, some have observed that the interaction between the two groups may actually result in an enhancement of overall quality of content.[23]

Startup accelerator and angel investor Y Combinator co-founder Paul Graham, on a page of "Startup Ideas We'd Like to Fund", lists “More open alternatives to Wikipedia“, in which he laments:

Deletionists rule Wikipedia. Ironically, they're constrained by print-era thinking. What harm does it do if an online reference has a long tail of articles that are only interesting to a few people, so long as everyone can still find whatever they're looking for? There is room to do to Wikipedia what Wikipedia did to Britannica.[24]

Novelist Nicholson Baker recounted how an article on the beat poet Richard Denner was deleted as "non-notable",[A] and criticised the behaviour of vigilante editors on Wikipedia in New York Review of Books.[10][25]

There are some people on Wikipedia now who are just bullies, who take pleasure in wrecking and mocking people's work – even to the point of laughing at non-standard 'Engrish'. They poke articles full of warnings and citation-needed notes and deletion prods till the topics go away."

Such debates have sparked the creation of websites critical of Wikipedia such as Wikitruth, which watches for articles in risk of deletion.[19] Wikinews editor Brian McNeil has been quoted as saying that every encyclopedia experiences internal battles, the difference being that those of Wikipedia are public.[14]

In 2009, Wikipedia began to see a reduction in the number of edits to the site, which some called a result of user frustration due to excessive deletionism.[26]

The notability of the South African restaurant Mzoli's was under scrutiny in Wikipedia as well as outside sources.

Specific cases of disputes between deletionists and inclusionists have attracted media coverage.

On Valentine's Day 2009, art activists Scott Kildall and Nathaniel Stern created a Wikipedia article called "Wikipedia Art", which sought to "invite performative utterances in order to change" what content was acceptable to include in the article itself.[27] If an individual were able to have their remarks regarding the concept of Wikipedia Art published in a source that was acceptable for a Wikipedia citation, it could be cited and included in the article. Deletionists argued that the article's premise—an art experiment in the form of a Wikipedia article, with the goal of generating controversy among Wikipedia users to legitimize the article itself—rendered it un-encyclopedic, and inclusionists argued that since the Wikipedia Art article had been referenced by multiple online art journals, it qualified as encyclopedic material. In response, deletionists contended that the sources used to legitimize the article were unreliable regardless of if the article was legitimate in the first place.[28] The article experienced a speedy deletion within 17 hours of creation, in contrast to the normal deletion discussion process that generally takes 7 days.[29] Yale research fellow Claire Gordon called the article an example of the "feedback loop" of "Wikipedia’s totalizing claims to knowledge" in a 2011 Huffington Post report.[30]

The article on South African restaurant Mzoli's was nominated for deletion after being created by Wikipedia co-founder Jimmy Wales,[3] who said that supporters of deletion displayed "shockingly bad faith behavior." The article was kept after a multitude of editors helped work on it.[18] The consequence is that while inclusionists can say the deleting administrator crossed the line, deletionists can say that the process works as notability was established.[23]

In February 2007, the nomination of the Terry Shannon article for deletion[31] was ridiculed by The Inquirer.[32]

The deletion of the biography of television anchor Susan Peters, the article for the Pownce website[3] and Ruby programmer Why the lucky stiff also sparked controversy.[33]

Comic book and science fiction/fantasy novel writer Peter David became involved in a November 2009 discussion on the deletion of actor Kristian Ayre's Wikipedia biography.[34] David took issue with the quality of the discussion and what he perceived as deletionism on the part of some of the project's editors. He wrote about the experience in his "But I Digress ..." column in Comics Buyer's Guide #1663 (March 2010), remarking that "Wikipedia, which has raised the trivial to the level of art form, actually has cut-off lines for what's deemed important enough to warrant inclusion." In attacking the practice in general, David focused on the process by which the merits of Ayre's biography were discussed prior to its deletion, and what he described as inaccurate arguments that led to that result. Referring to the processes by which articles were judged suitable for inclusion as "nonsensical, inaccurate and flawed", David provided information about Ayre with the expressed purpose that it would lead to the article's recreation.[35] The article was recreated on January 20, 2010.[36]

Wikipedia co-founder Larry Sanger identified himself as an inclusionist, except on certain topics pertaining to sexuality, for his Citizendium project.[37] Wikimedia Foundation executive director Katherine Maher also identifies as inclusionist.[38]

Andrew Lih, a deletionist-turned-inclusionist, observes a cultural shift from Wikipedia's initial expansion in that it has become more cautious. He changed his position when an article he created about the social networking website Pownce was speedily deleted by another administrator as advertising.[14]

In July 2006, The Inquirer was offended by claims made by certain Wikipedia editors that it conspired with Everywhere Girl to create her phenomenon. They observed an apparent campaign to remove all references to Everywhere Girl on Wikipedia.[39] Later, they found it contrary to common sense that what became included on Wikipedia was their series of reports on the deletions of the Wikipedia article.[40]

In December 2006, writer and composer Matthew Dallman found that Wikipedia's biography of him was under debate, and became drawn to the vote counts. He was deciding to not participate on his own behalf because of Wikipedia's apparent dislike of self-promotion, saying that "It's like I'm on trial and I can't testify," though he would not be able to resist the urge.[11]

Andrew Klein was disappointed that the article on his webcomic Cake Pony was deleted, despite his claims that the "article contains valuable and factual information about a popular internet meme." He conceded that "it's their site and you've got to play by their rules."[11] Many other webcomic-related articles were deleted in fall 2006 to criticism by their artists.[10]

Slate.com and The Wall Street Journal writer Timothy Noah documented his "career as an encyclopedia entry," and questioned the need for rules on notability in addition to rules on verifiability.[5][41]

At the 2005 Digital Arts and Culture Conference, the two groups were discussed as examples among "Eventualism" and "Immediatism" in a successful large-scale architecture of participation.[12]

The Institut national de recherche pédagogique (National Institute for Educational Research) in France, in case studies of Wikipedia, reported that while it was difficult to measure the influence of the groups as of April 2006, their existence is indicative of Wikipedia's internal dynamics consisting of multiple identities,[17] and may play progressively increasing roles.[42]

Deletion debates over an article on Enterprise 2.0 sparked a study by the Harvard Business School.[9]

In the Journal of the Association for Information Science and Technology, a study of Wikipedia's social dynamics called inclusionism and deletionism the two most prominent associations within Wikipedia. They observe that users in the same role (administrator, etc.) may hold different perspectives, and that "the diversity of member [information quality] preferences and the low cost of forming or switching associations may encourage schism in an existing association or evolution of new groups." At the same time, the associations may help to better critique existing policies and to find and achieve points of convergence.[2]