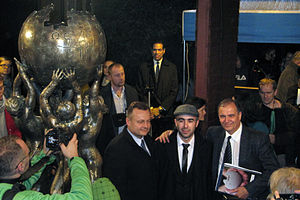 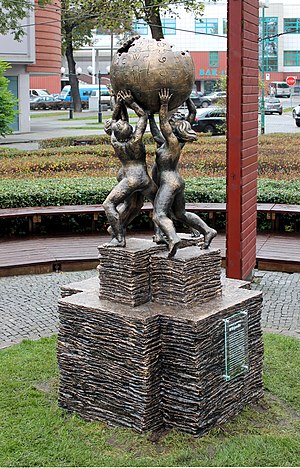 The Wikipedia Monument (2014) in Słubice, Poland

Mihran Hakobyan (Armenian: Միհրան Հակոբյան; born February 18, 1984) is an Armenian sculptor. He created the Wikipedia Monument in Słubice, the first one of its type.[1]

Mihran Hakobyan was born in Stepanakert. His father, sculptor Armen Hakobyan (1941–1990),[2][3] died during the First Nagorno-Karabakh War.[4] From 2000 to 2006, he studied sculpting at the Yerevan State Academy of Fine Arts.[5] He thereafter worked in his profession in Armenia and Russia,[5] participated in several exhibitions in Stepanakert[4][6] and Yerevan.[7]

In 2001, he became a member of the Artists Union of the Nagorno-Karabakh Republic. In 2011, he participated in an international symposium on sculpture in Shusha.[5][8] Hakobyan mainly creates sculptures of stone, wood or bronze. From 2010 till 2013 he studied Polish Philology at the Collegium Polonicum in Słubice. 2012 Hakobyan received a scholarships of the Polish Kulczyk Foundation.[9]

On behalf of the Director of the Collegium Polonicum, Krzysztof Wojciechowski,[10] Hakobyan created the Wikipedia Monument in Słubice. On 22 October 2014 the monument was unveiled at the Plac Frankurcki (Frankfurt square). The monument was sponsored by the city Słubice with 62,000 Złoty.[11][12][13]

Mihran Hakobyan also works with cartoons, especially with plasticine figures.[14] For his cartoon „Зонтик“ (Umbrella) after a story by Leonid Yengibarov[15][16] he received the audience award at the Short Film Fund in Moscow 2013.[17][18]