Women in Red is a WikiProject addressing the current gender bias in Wikipedia content. The project focuses on creating content regarding women's biographies, women's works, and women's issues.

The project is named after the hyperlinks in existing Wikipedia articles that display in red to indicate that the linked article has yet to be created.

Women in Red was conceived by volunteer Wikipedia editor Roger Bamkin in 2015, and volunteer editor Rosie Stephenson-Goodknight joined forces soon thereafter. Bamkin had initially coined a name for the project, "Project XX", but that was quickly scuttled in favor of WikiProject Women in Red.[1]

After the project was up and running, volunteer editor Emily Temple-Wood signed on. Her specialty is adding a new Wikipedia article about a female scientist each time somebody harasses her about her volunteer editing efforts.[1]

At Wikimania 2016, in Esino Lario, Italy, Jimmy Wales, who co-founded Wikipedia in 2001, named Stephenson-Goodknight and Temple-Wood the Wikipedians of the Year, for the prior 12 months, for their effort to fill the gender chasm.[1] 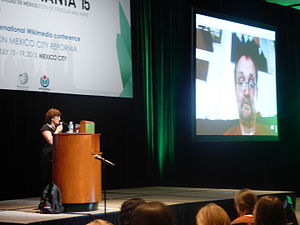 Rosie and Roger (appearing via Skype) announcing the formation of Women in Red during Wikimania 2015 in Mexico City. 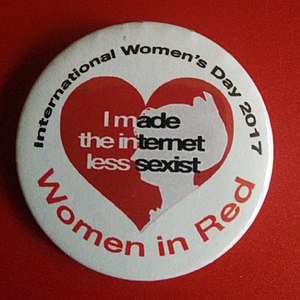 Women in Red conducts Wikipedia edit-a-thons in cities around the world, and continuously hosts a virtual one.[2] The all-day in-person edit-a-thons are focused events conducted to train new contributors so that the Wikipedia gender gap can become narrower and include more content on notable women.[3] Another goal is to increase the number of female editors. Though Wikipedia is "the free encyclopedia that anyone can edit", as of 2015 about only 10 percent of editors were women.[4][5][6][3]

The Women in Red participants help to collate 150 work lists of red linked articles to make it easier to find and create the missing articles.[7]

As of December 22, 2016[update], Women in Red volunteer editors added over 45,000 articles, and the percentage of tallied articles increased marginally to 16.8 percent of English-language biographies (from 15 percent in July 2015).[8]